The Distinct Linguistic Diversity in Louisiana

The state of Louisiana in southeastern United States is distinct for its linguistic diversity. It is estimated that more than 40 languages are spoken in Louisiana aside from English. Louisiana is the 25th most populous state in the U.S. Aside from being a distinctly multicultural and multilingual society, Louisiana is the only U.S. state that calls its political divisions as parishes instead of counties.

Looking back into Louisiana’s past

Many urban environments in the state have multilingual, multicultural heritage. They were influenced greatly by a combination of African, Native American, Spanish, Haitian and French cultures from the 18th century. Due to this Louisiana is considered an exceptional state.

The former French colony, which became a colony of Spain for a brief period, was purchased by the United States in 1803. In the 18th century numerous people from the same regions in West Africa were brought by colonists as slaves to work in Louisiana. Due to this, their own culture flourished in the state. After the American Civil War, Anglo-Americans pressured the region to be Anglicized. In 1921, English was declared as the only medium of instruction in the schools in Louisiana. In 1974, the multilingual policy was revived, which favored the different major languages spoken in the state.

Louisiana does not have an official language. The people are free to use their own language and follow their cultural traditions. According to its constitution, the people have the right to promote, preserve and foster their individual cultural, linguistic and historic heritage.

The coexistence of diverse cultures and languages in Louisiana is unique. Some think that it is peculiar and extraordinary. However, it was not by design. It is more due to the strategic position of Louisiana geographically and economically. Louisiana is situated along the Mississippi River connecting the northern states to the Gulf of Mexico. This made the state very important, which did not escape the interest of several countries in Europe, particularly during the colonial period.

The first European country that set foot in Louisiana was Spain but they did not stay long. After Spain, the French colonized the land late in the 17th century, occupying the region past the Gulf of Mexico into Canada. Louisiana was called La Louisiane or La Louisiane française as New France’s administrative district. René-Robert Cavelier, Sieur de la Salle, a French explorer, named the region after King Louis XIV. Louisiana was a French territory from 1682 to 1762. Nominally, the French controlled it further from 1802 to 1803.

Today, the state is bilingual. English became a major language after the new constitution was enacted in 1921. At that time French was banned from being learned in school or spoken. It was only in 1968 after the establishment of the Council for the Development of French in Louisiana (CODOFIL) was French reintroduced in the state. CODOFIL was created to improve and preserve the French language in various societies in Louisiana.

Just like its multicultural society, the many languages spoken in Louisiana have influenced each other after several centuries and at different times, thus the languages have develop particular idioms.

French for example, which was spoken in Louisiana for 80 years before the state was Anglicized had developed into different varieties. The French branch came from Colonial French and Cajun French. The English that is spoken in the state was from Yat and Cajun English. The Louisiana Creole came from a mix of several French Creoles.

The Acadian language, which originated from the French spoken in the Poitou and Anjou regions, led to the development of Cajun French. Acadian language grew autonomously. It was used in the Maritime Provinces of Canada and in Maine in the United States. From there the language spread into South Louisiana when the British were forced out and deported during the Indian and French War from 1755 to 1763.

Cajun, which is spelled Cadien in French, is a combination of the vocabularies of Haitian Creole, Portuguese, German and Spanish.

Other Cajun dialects that developed were the result of the influence of other languages. Prairie French came from local Creole. Bayou French was influenced by Amerindian dialects.

Plantation Society French or Colonial French was spoken in lower Louisiana. That was before the arrival of the Cajun dialect. Colonial French was spoken until the 19th century. Very few still speak Colonial French today. The French-speaking people during that time spoke Colonial French mainly for economic and cultural reasons. It helped them to keep in close contact with their country of origin, France as well as the French colonies in the Caribbean. They also spoke the language to make sure that they maintain cultural continuity and financial supremacy among the colonial families that spoke French in the state.

The Cajun people are of Acadian heritage. The Acadians were immigrants who came from Nova Scotia. They speak a variety of English called Cajun English, which initially developed as the language of commerce and trade used by the first batch of Cajuns in Louisiana when they trade with the English-speaking traders in the area. The dialect has almost vanished today due to the restrictions established by the 1921 Constitution on the use of spoken French.

Cajun English was influenced by the dialects of the ethnic groups in Louisiana although its features were dominantly of French influence. It can be seen on the dialect’s phonology and its lexicon. Notable features are the stress on the final phrase or word and the simplification of vowels and consonants

Louisiana’s largest city, which is a major port in the U.S., has its own dialect. It is called New Orleans dialect or Yat. Yat is spoken in the metro area. It came from the phrase “Where y’at?” that is equivalent to “How are you?” People in New Orleans say it with a drawly accent that can differ greatly, based on the accent of Italian and Irish immigrants who reside around the port city. Linguists say that the way Yat is pronounced does not show influence from the other major languages such as African, Spanish or French.

Yat closely resembles the dialect of New York City, specifically the one spoken in Brooklyn historically.

Further, the particular intonation of Yat depends on the social and geographical origin of the speaker. Most evident distinctions include the dropping of the R from the end of the word, stressing of the letter R whenever it appears in the middle of a syllable, splitting some of the syllable, and adding a deeper sound on interdental fricatives. Moreover, Yat speakers use prepositions oddly, which is reminiscent of the German language.

Listen to Yat being spoken here.

It’s probable that Louisiana Creole developed in the plantations located near the Mississippi River, particularly in Southwest and South Louisiana late in the 18th century. Linguists say that Louisiana Creole did not develop from the already existing creole or pidgin dialects from the Caribbean or Africa. Louisiana Creole rose because of plantation slavery and French colonialism. It happened because the African slaves came from one specific area, the Senegambian Region. The slaves spoke several Mande languages such as Soninke, Malinke and Bambara. The dialect includes the use of French articles such as a, la, le, la and les. Its grammar is similar to Haitian (French-influenced) Creole grammar although it differs from French by the absences of verb conjugation and noun genders. Tenses were spoken with verbal markers placed prior to the verbs.

Some Louisiana natives also speak various minority American Indian languages particularly Choctaw and Koasati although these are also influenced greatly by Pidgin English they assimilated from Arizona Apaches. Some American Indian groups speak Spanish that is mixed with Mobilian jargon that originates from the Central Gulf Coast.

Historically, several American languages were spoken in the area, which helped identify their heritage, such as Chitimacha, Atakapa, Choctaw, Houma, Natchez, Tunica and Caddo. The only languages with living speakers today are Choctaw and Caddo. However, several tribes are working to revitalize and teach their own languages. Ofo, Koasati, Biloxi and Alabama peoples migrated to Louisiana from the east to escape the pressure from the Europeans. They effectively increased the number of Native American languages spoken in the state.

Although some people speak Spanish, the numbers are quite low. Most of the speakers are located in the St. Bernard Parish, in an area named Isleño. The Spanish they speak is a maritime variety that originated from the Canary Island. It also came from New Orleans itself, where a group from the Caribbean revives the influence of Spanish from the 18th century.

Some groups in New Orleans speak Sicilian while older people still speak German. It’s probable that their ancestors were the German settlers from the 19th century. Vietnamese is another language that came into Louisiana from the innumerable contacts with speakers of other varieties of French.

Whether you need English, French, Spanish, Vietnamese or Native American language translation, call Day Translations, Inc. We have experienced and professional native-speaking translators who will provide you with the most accurate translation in over 100 language pairs. You can give us a call at 1-800-969-6853 or send us an email at Contact us anytime. We are open 24/7, 365 days a year to serve your translation requirements in any time zone anywhere in the world. Trust Day Translation to deliver the fastest translation in the planet without sacrificing quality.

Which Spanish to Use to Penetrate Sp
Culture, Languages 5 Min Read

Languages
Dissecting the Apocalypto Movie: A Rainb
by  Kayan Milwood
0
0
870 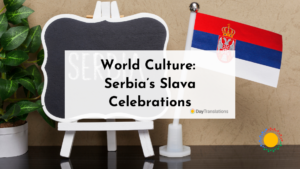