Generation Z, or as they are better known, the Zoomers, are the generation currently under the spotlight. Aside from their dreams and slang words lingo, there’s a lot that separates the youngest generation from the ones before them. But what is the meaning behind Gen Z language?

What inspires their unique slang and what shapes their bold culture?

In this post, we’ll be deciphering the sometimes-cryptic generation influenced by African-American vernacular English! Without further ado…let’s get talking about the generation!

According to the Pew Research Center, this generation includes anyone born between 1997 and 2012. In some other research studies, the definition varies by give or take a few years.

This makes the current generation (2021) anywhere between 9 and 24 years old. But then again, you can’t really say that a 9-year-old and a 24-year-old are in the same cohort.

So before we even try to dive into Gen Z slang words and language, let’s just acknowledge that it’s a really difficult group to pin down.

Back to the research then! Pew Research Center suggests that there are quite a few differences between Gen Z and their predecessors. Gen Z is much more diverse than other generations before them.

They’re also more educated and politically more liberal on topics like race, climate change, and same-sex marriages. Although these topics have been around for decades, they formed the foundations for Gen Z language and identity!

Early in  2021,Saturday Night Live created a skit called “Gen Z Hospital”. In the skit, everyone used the youngest generation’s slang. Phrases like “catch hands”, “sus”, and “the tea” were stars of the day.  But then viewers pointed out that a lot of this slang was in fact African American Vernacular English.

And this isn’t the first time it happened. In fact, there has been a lot of conflation of AAVE and Gen Z’s slang in the last year.

the truth is that Zoomer culture has been heavily influenced by AAVE, meaning that many of their “innovative and unique” phrases are based on what generations before them used.

Whether you admit it publicly or not, Zoomers are an intriguing generation. Here are some quick facts about them you probably didn’t know:

They Are Younger than Google.

Google was born on September 4, 1998. Now, Google is replacing much of the conversation these kids should be having with their parents.

And if Google doesn’t know the answers, Alexa or Siri probably does.

Their Lives Are Guided (and monitored) by Social Media Apps

Millennials grew up with their cellphones. But Zoomers? They’ve got smartphones, which are basically just portable computers.

Their every move is tracked, and they’re always nudged this way or that way. And that keeps them interacting with their tribes in their echo chambers.

There’s been a decline in the importance of academics among men in this generation. But for females, education feels tailored, which is why 60% of them are in college today.

We’re excited to see how these stats affect the executive jobs and income gap of the future!

Video is their Go-To Entertainment

87% of Zoomers play video games at least once a week. The virtual world is much more satisfying to this generation than those before them. We’re officially dealing with screenagers.

This might affect their communication and interpersonal skills in the long run, but it’s still too early to say.

If you’re not sure which characteristics the youngest generation is best known for, here’s a crash course: Gen Z ers are:

Most members of this generation are racially and ethnically much more diverse than those before then.

They also have a more open-minded culture, meaning that they’re more accepting and empathic than the generations before them when it comes to racial and gender differences.

Because they have technology at their fingertips, many Zoomers turn to the web to read reviews, critiques, and specs before they make any purchase or deal.

While we’re on the topic of tech, it’s important to mention that this generation doesn’t really remember a time before the internet and smartphones.

They have the ability to navigate tech much more effectively and efficiently than their predecessors.

because tech makes life that much easier, this generation tends to be on the impatient side of the scale.  They know what they want, and they want it now.

They’ve been raised in a world where same-day deliveries are the norm, not an optional extra.

Millennials were known for their excellent teamwork and collaboration. But this generation? They’re fiercely independent, meaning they’re also very competitive.

Their upbringing featured social media likes and follows, so they quantify this into their everyday lives, striving to be the best in all they do.

If nothing else, the COVID-19 pandemic highlighted just how flexible the current generation is when it comes to time and place. They don’t necessarily have to be in the same room to make a connection with someone.

The older generations battle with this, and it’s even tricky for the millennials to maintain remote relationships.

But as more Zoomers enter the workforce, we might soon see a shift in the demand for permanent remote working.

It goes without saying that your dialogue changes as you mature. And when you look at different age cohorts, it becomes even more apparent.

While you’re born into and stay in a generation throughout your lifespan, you’ll grow into and out of cohorts over the years.

What we’ve seen from observing cohorts is that people tend to become more conservative as they mature from adolescence to middle age.

The word talking – used in the first paragraph of this article – is a good example.

The youth in America seem to pronounce a lot of words that end with an “-ing” sound as an “-in” sound instead. So, they say talkin instead of talking. And walkin instead of walking.

Yet, as they mature, they start using the correct pronunciation again. Essentially, people use more ‘conservative’ and acceptable language once they enter the workforce.

Right now, Gen Z is in the least conservative cohort. They’re much more likely to experiment and try what they hear other people are doing, rebelling against what their parents did in the past.

The words they invent are arguably the most significant part of any generation’s language. It is in young people that we often see the most linguistic innovation.

And just like generations before them, Gen Z (and Gen Z slang) is currently the most vibrant.

But the problem with slang is that it changes very often. We could make a list of current trending slang words, and it would have changed noticeably in 6 months from now.

It seems like yesterday that everyone was using the word “mood”, but “vibe” is much hipper today than it was at the start of 2021.

We still rounded up and example (and then some) of slang terms that are trending. But please excuse if that by the time you read this, these terms and their  meaning are already old news!

The meaning of “boujee” is about trying to look  better than you are. It means uppity or aspiring to be higher than one’s social and economic class. So, for example, if a girl has an expensive purse that she can’t really afford and she’s  flaunting it,  they might refer to her as boujee.

Bop means it’s a good song. So, for example, a Zoomer will refer to music as “bop”  if it’s really good.

LOL, if you thought “fit” meant being in shape! Also, Americans don’t use “fit” as the Brits do. In the U.K., “fit” means attractive, but in the U.S, the high key meaning is actually just a shortened version of the word “outfit.” For example, if someone says “your fit is fly”, the  hidden meaning is that you look good in that outfit.

In Gen Z slang term, “fire” means something is really amazing or cool. They also use it to express excitement or point out a new trend within their culture.

“Tea” is gossip within this culture, meaning to “spill the tea” is the act of gossiping. If someone from this generation asks you if you’re in the mood for tea, it’s not an invite to a mid-morning snack, but rather a more intense version of a good old gossiping session!

A thirst trap is a type of social media post intended to entice viewers sexually. It refers to a user’s “thirst”, a colloquialism likening sexual frustration to dehydration, implying desperation. The term originated around the early 2010s, the meaning has changed over time.

Many of us have heard this one being thrown around. If you haven’t, it’s because you haven’t listened to a Zoomie rave about an event before. They use slang terms like “lit” to describe the meaning of something that is exciting, amazing, high-energy, or just plain great. For example, they’ll add emphasis to the way the music makes them feel by saying that it’s “lit” instead of just good.

An artificial hairdo isn’t exactly what Gen Z language uses as the meaning for the word “wig.” Instead, it refers to what happens to that hairdo. They use this phrase when something is so amazing, so mind-blowing that it blows your wig straight off.

If you’re “salty,” it means that you are upset, annoyed, bitter, or ticked off with something minor.

To “drag” means to criticize or make fun of something. It’s usually similar to roasting someone.

The word “drip” refers to a cool sense of style. It’s about the way someone carries themselves and the kind of outfits they wear. Young people use this term a lot on social media to describe someone they envy on the internet.

Gen Z is probably the first language that won’t remember life before the modern internet. Facebook changed our world in 2004, just seven years after the oldest millennials were born.

Three years after that, the first iPhone hit the market. Gen Z is growing up online. 95% of the generation aged 13-17 have access to smartphones. 97% of them are active on social media.

And so is Gen Z language.

They use traditional words (with brand new meanings) to describe excitement, community, culture, an inside joke, and things unique to their age group. Gen Z ers are the ones setting mainstream trends, but they’re super low-key about it.

So, if you’re part of the older generations and you’re low-key trying to understand the new words used to describe everyday life, you’re not alone!

Mentioning likes, faves, and sliding into the D.M.s is one way to keep most people within this cohort included in the world’s culture, but perhaps it’s time we all start better interpreting the message they’re sending out to the world.

In the spirit of fostering an inclusive community, it’s time we all embraced Gen Z culture, get behind the meanings of the phrases and slang used to describe their experiences, and embrace the changes ahead together! 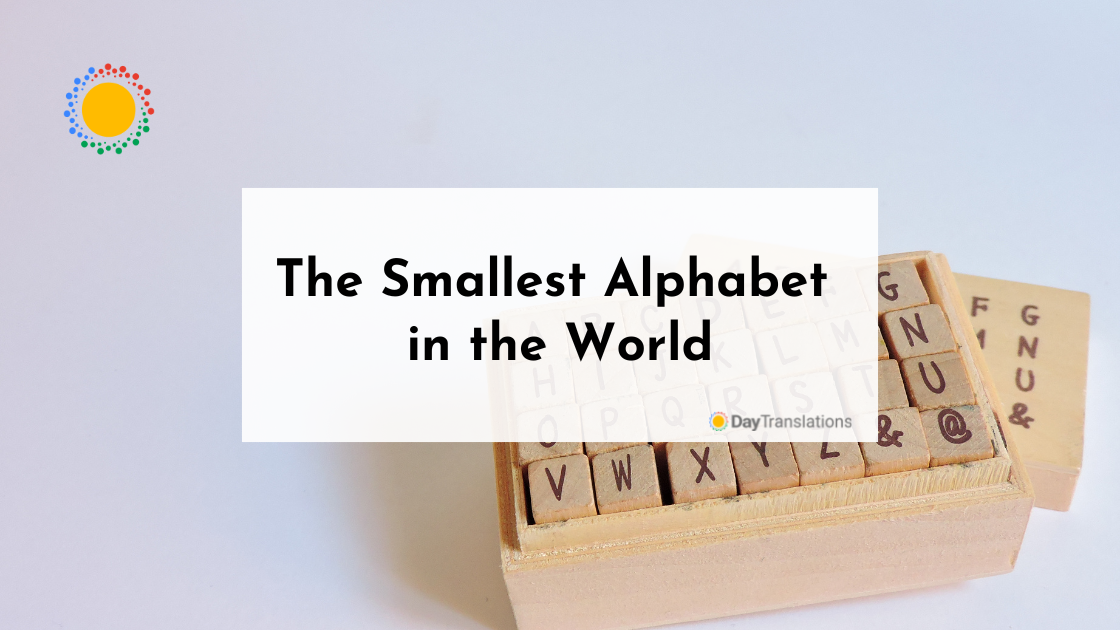 The Smallest Alphabet in the World
Languages 5 Min Read