Top 3 Online Translation Tools for 2018: How Do They Work? 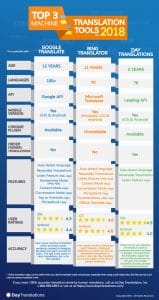 As more locations in the world open their doors, more languages are exposed and exchanged. However, the language barrier still exists. There would be no real communication if people cannot understand one another. The prolific use of social media among the younger set is still generally divided into groups, with people speaking or understanding a common language banding together.

Due to the need to understand what another person is saying, several online translation tools or apps were developed. People wanted to have foreign words translated immediately. While there are dictionaries in different languages, it is not possible for people to possess several foreign language dictionaries unless they are needed for work or study. Besides, it will take time to find the right meaning in one’s mother tongue when you have to look up each word in the dictionary.

Translation tools became handy in translating foreign words. Most are able to provide acceptable translation but only for words. It becomes another matter entirely when translation of long phrases and sentences are requested.

One of the pioneers in free online translation tools is Google Translate. It has a web interface and also has mobile applications for iOS and Android mobile phone operating systems. Google Translate has an API that can be used by developers who build software applications and browser extensions. According to the company

The accuracy of the translation Google Translate provides has been ridiculed and criticized. Google Translate switched to neural machine translation in November 2016. In this new engine, the system translates whole sentences instead of chopping the sentence into parts or word for word. The system tries to come up with the closest translation available from its database. It then adjusts and rearranges them to make the sentence appear like it is spoken by a human using the correct grammar.

Google crawls the net and saves text from a multitude of webpages. The web crawlers just look for pages that look like translations and compile them. The company hopes that overtime, the errors would be able to cancel each other out. The app is still useful in short translations, but is far from perfect as it can still churn out translations that are unintelligible or unacceptable.

An example is the translation of a Russian nursery rhyme into French, where the Russian phrase for ‘two happy geese’ became “deux oies gay” that translates into “two homosexual geese” in English. The error was caused by the two meanings of ”gay” in English, which is the bridge language when Google Translate performs translations. The company continues to improve and in time, the quality of its quick translation would be better.

Microsoft Translator offers free and paid versions of its service for speech and text translation.

Its first version of machine translation began around 1999 or 2000. It was a product of the grammar correction function of Microsoft Word, which was used to translate into Japanese, German, French and Spanish the entire Knowledge Base of Microsoft.

The Bing Translator is data driven. This means that instead of writing the precise rules for translating natural languages, the system trains the algorithms to understand and interpret the parallel texts that were translated. This allows the algorithms to learn how to translate text from new languages automatically.

Bing Translator used to be called Windows Live Translator. It was made public in 2007. From its own website, it provides text translation (from its webpage) and website translations (from the tools of the Bilingual Viewer) for free. In March 2016 Microsoft offered its speech translation service in free and paid versions.

Just last month (May 2018), Microsoft released an update to its API. Its new default translation method is now neural machine translation and features a bilingual dictionary so users can look up alternative translations of words. It also has the capability to provide usage of the word in sample sentences. The new API is capable of transliteration as well.

In terms of format, both Google Translate and Bing Translator feature a webpage where two rectangular boxes are placed beside each other. You enter the text or the website URL you want to translate on the left box, which can auto detect the original language. You choose the target language from the drop down language selector and wait for the translation to appear in the box on the right. Another feature both of the online translation tools have is the capability to let you hear the translation.

Bing Translator offers a free widget that developers can add to webpages. It supports pre-publishing customized translations via Translator Hub and improvements in post-publication through the Collaborative Translations Framework (CTF), where readers can suggest alternative or better translations.

Bing Translator and Google Translate are capable of quickly providing translations. It is the accuracy of the translation that is in question. They are not capable of providing the accuracy that can be delivered by a skilled human translator, especially on complex texts. They are not gender specific and do not understand the nuances of the language.

Day Translations, Inc. offers its own free online translator, the Day Translator. Its easy-to-use interface is the same as the other online translators, with two boxes placed side by side and an auto-detect function to automatically identify the source language. The user can also use the drop down menu to select the language. Choose the target language from the drop down menu on the right box, then hit the translate bar and wait a few seconds for the page to load the translation. The tool is capable of reverse translation, meaning you can translate the translated text back into the source language by clicking the blue button with the arrows pointing at different directions.

Day Translator draws from its own database of translations done by professional human translators in the past. This means that the translation output, which is also done by machine, may only be 76% accurate but you can get a much better translation of words, phrases and complete sentences. In short, the context of the text you wish to translate is clearer and easier to understand. Share this with your friends. It’s better and it’s free.

The Day Translator tool offers translation services in 76 languages from Afrikaans to Welsh.

We acknowledge that online translation tools can be useful when you need to translate words and phrases, especially when using social media sites. But they are not to be used for serious translation work. If you want 100% accurate translation done by human translators, call us at Day Translations, Inc. Our translators are native speakers and are located all over the world. Get in touch with us at 1-800-969-6853 or send us an email at Contact us to request a translation quote. We are open 24/7, all days of the year to serve you anytime you require translation to and from over 100 languages.

How to Write Effectively for Transla
Infographics, Translation 5 Min Read 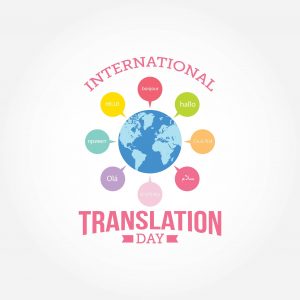 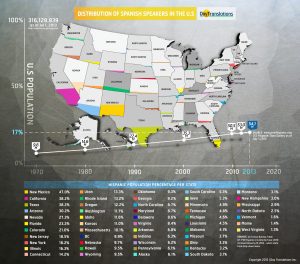