It’s, Like, You Know: The Science of Filler Words

Have you ever been called out for using fillers when you talk? They’re, like, you know, the verbal pauses we all subconsciously sprinkle into our speech when we’re stalling, or, uh, unsure. Old-school etiquette experts reckon younger generations are littering their language with way too many filler words. But what if using filler words was, like, you know, natural?

The Deal with Filler Words

Noam Chomsky and other like-minded linguists have stated that disfluencies (filler words that interrupt the natural flow of speech) are just a fub in human language performance. In short, they’re mistakes. But there have also been others that delved a little deeper into the semantic and pragmatic roles of filler words.

Professors at the University of California in Santa Cruz and Stanford refer to these verbal tics as conversation managers, stating that filler words, which might seem like seemingly useless semantic fluff, are vital to the development of dialogue.

💡 Did you know that the words um and uh appear every 60 words in the average person’s dialogue?

Whenever we’re nervous or talking too fast, we use filler words to try and collect our thoughts so that they can be seen as a staple of impromptu speech. They’re especially helpful whenever an idea is at the tip of your tongue or when you feel like you’ve got a thousand things you absolutely have to say in a split second.

On top of assisting in the development of dialogue, filler words are also great listening cues. The University of Sydney’s linguistic department refers to these disfluencies as traffic signals that regulate the flow of social interaction.

Whenever someone is talking, they give off subtle cues about when listeners have the green light to respond, usually indicated with silence. But instead of going silent and allowing the listener to respond, speakers use filler words as a sense of saying “to be continued”.

💡 Some researchers claim that 6 to 10 percent of what we say consists of filler words!

Filler words are much more prevalent in unrehearsed speeches, presentations, and lectures, and that’s only because properly prepared speeches have been practiced more. Hence, the speaker is comfortable with what needs to be said in a certain amount of time.

It’s not only English natives that use filler words. Verbal pauses are found in languages all over the world, and just like they’re scrutinized in English, fillers aren’t really esteemed in other languages either. In Czech, they’re called slovni vata, which translates to word padding.

You might even recognize some filler words in other languages. The French equivalent of um is euh. In Germany, they say äh and ähm for uh and um. And it seems like human nature to drag out the last vowel of a word when we’re pausing to think before we speak, like the way we say soooo when we’re introducing a new point of discussion.

It’s in our nature to use filler words when we encounter processing delays, and whether everyone likes it or not, it’s something we all use to communicate more effectively. In fact, learning language-specific fillers can actually help you feel more at home in a foreign country when you don’t have the right words to express your thoughts, so in a way, it might be just as important as body language.

Keen to learn more about the science of interpreting languages and their unique nuances? Check out our blog for more awesome nuggets of wisdom! Jamaica: The Beauty of its Culture a
Languages 5 Min Read 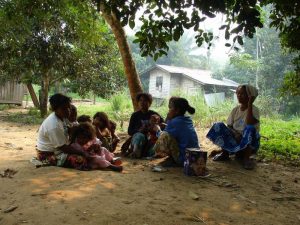 Languages
What the United States Does Not Have: An
by  Bernadine Racoma
0
2
3k