Tipping Practices in Different Parts of the World

A tip, otherwise known as a gratuity, is an amount of money that is given to certain workers who perform a service. The act of tipping, as well as the amount that is decided vary, depending on the special customs and norms practiced in any particular country. There are some places that discourage the practice and may even find tipping insulting; other places may actually see it as something to be expected. Some establishments and restaurants now add in a “service charge” above the total of a bill for services rendered by their staff.

For travellers, knowing whether tipping is appropriate or not and the expected amount to be given are important information. It is best to know what is customary to avoid embarrassment or create animosity in any way, while visiting a different country.

Here are the tipping practices in different parts of the world:

USA
In the US, tipping is a bit more complicated than others. While it is a common rule to tip 15% for good service, there are still a lot of exceptions to the rule. It is usually in eating establishments where tipping is commonly practiced. This may be because of the fact that the base wages of these workers are quite low, making them rely more on the tips they receive, rather than the salary itself. This is why customers expect the best service and would tip more than 15% if they are satisfied. In the larger US cities, a normal tip would be around 20%. For self-service restaurants, a tip jar is visible for customers to drop in some change, though it is not obligatory. With porters and bartenders, a dollar per bag or drink is the normal tip. Cab drivers like hair salon workers expect roughly 10%-15% on top of the total amount of the services rendered.

Canada
In Canada, tipping is a normal practice in whatever service industry is in the country. The common amount is 10%-20%, according to the type of service that has been offered a customer. Like in the US, servers and waiters in restaurants and other eating establishments are not paid a very high basic salary. This makes them depend on tips a lot more, and it is always appreciated. Because it is in the culture to tip, forgetting the practice is somewhat unthinkable for locals.

Australia
The practice of tipping is not a part of Australia’s culture. Some people say that service sector workers in the country are sufficiently paid and tipping is unnecessary. However, it is still very much appreciated, and 10% is appropriate should you decide to tip anyway for satisfactory services. A tip jar may be seen in establishments and customers may leave some change if they wish.

Japan
Although tipping is not the rule in Japan, there are a few exceptions too. One exception would be establishments owned and run by foreigners. A lot of these foreign-run businesses have underpaid workers, making them dependent on tips as well. Sometimes a tip jar is visible so that customers know that tipping is all right. Japanese businesses do not encourage tipping. Should a Japanese establishment accept tips, it must be wrapped or placed inside an envelope. Money passed from one hand to another is considered to be inappropriate.

China
Traditionally, China does not practice tipping, apart from Macau and Hongkong. Nevertheless, hotels would normally allow it. People who are normally given tips in these establishments are tour guides or hotel drivers.

Spain
Although tipping is not required in Spain, it is nevertheless accepted with appreciation. Tipping is normally done in restaurants and hair salons, among others. A tip of 10% is appropriate. In Barcelona, having a picture taken with the “Las Ramblas” statues do call for tips as this is their only means of income.

France
Tips or “pourboires” as they are called in France are not really expected. This is because a service charge is usually added on your bill. Nevertheless, locals usually leave behind some change or may give about 1-2 euros for satisfactory service.

Germany
In Germany as well as Austria, the practice of tipping would not be something expected. Just the same, it is common to leave 5%-10% in eating establishments and bars. While tips were tax-free in the past in Germany, today they are considered to be an additional source of income.

Italy
In Italy, tips or “la mancia” are not the usual custom. They are only given when a special and high quality type of service has been rendered. In most restaurants, except for those in Rome, a service charge or “coperto’ is already added so that servers do not really expect any tips. They will however graciously accept tips from happy customers, especially foreigners. Leaving change is appreciated, and tip jars are now present in a lot of businesses in the country.

Bolivia
In Bolivia, the bill generally includes the service charges, though giving 5% is polite and appreciated.

Iceland
Tipping is not expected in Iceland.

South Africa
Though tipping is not mandatory in South Africa, tipping bartenders and waiters is customary. Small change from a bill may be given, and a 10% tip may be given for large bills. Some bar and restaurant staff receive generous tips for outstanding service. It is customary to give 1 or 2 rands for a single drink order.

Thailand
There is no required percentage for tips. A small tip is usually left in restaurants. It is rude to take back small change when paying with a large bill.

When visiting another country, it is a good idea to have certain information on local customs, including that of tipping. Remember that each country has its own take on the practice, and what may seem all right with you may not be what others think is proper. 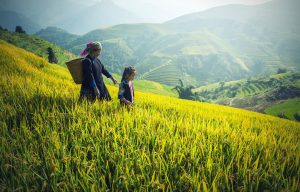