The Chinese welcome their New Year with a lot of pomp and noise from fireworks, firecrackers and lion and dragon dances. The Thais on the other hand welcome their New Year with much gaiety, through a huge water festival in the streets, enjoyed by locals and tourists alike. But this is not about having fun seeing people getting wet. Water is used as a symbol to cleanse the person from all of the past year’s misfortunes. When they are cleansed, they are ready to welcome the new year clean and fresh.

The Thai New Year, called Songkran, is celebrated from April 13 to 15 each year. Songkran is derived from a Sanskrit term that translates to ”pass or move into.” Songkran originated from the Festival of Makar Sankriti, an ancient festival from India. The Thais’ translation of the festival recognizes the transition of the previous year into the new year while the version in India is about the celestial path of the sun. 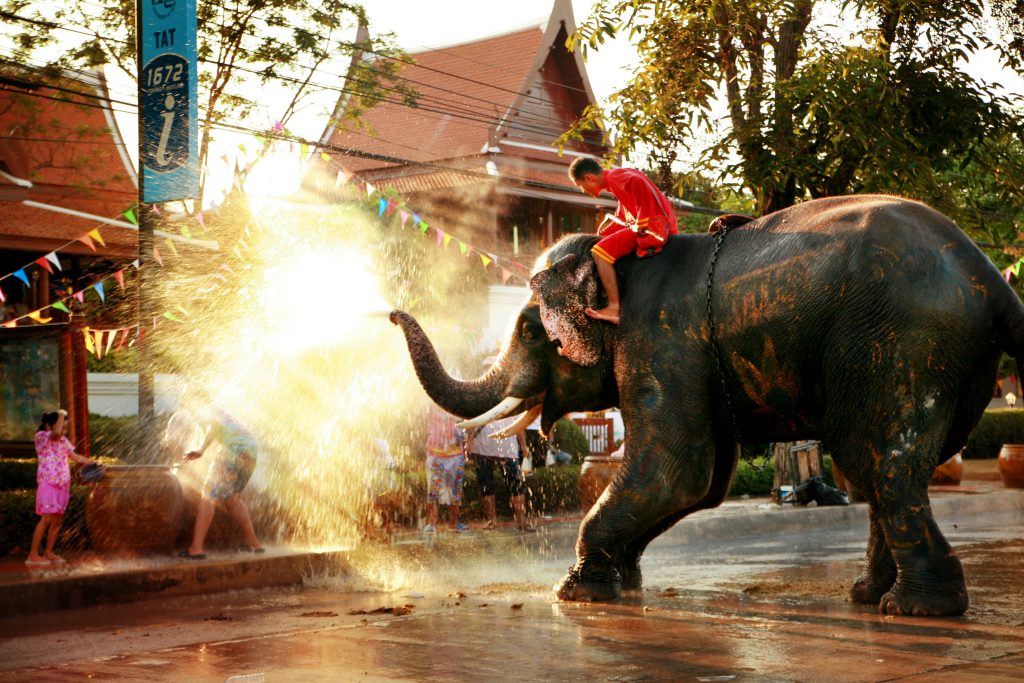 Songkran is the celebration of the New Year in Thailand. It is the time when families gather, their houses undergo an annual house cleaning, and people visit the temples.

The first day of the Songkran is officially called the National Elderly Day and people perform the ritual called Rod Nam Dum Hua. This is a merit-making ritual and an act of humility. The ritual involves pouring scented water into their elders’ palms and asking for their blessings.

Officially, the second day is the National Family Day. Family members start the day early by giving alms to the Buddhist monks and spending the rest of the day with the family. Many would also be ”bathing Buddha” by pouring fragrant water over various Buddha statues in their homes and in the temples.

The Songkran tradition originated from the prayers and blessings of Buddhist monks. In ancient times, it was customary for Thais to visit monasteries near their homes to bring food to the resident monks. Aside from the gift of food, they pour scented water over the monks in a holy cleansing ritual accompanied by blessings and prayers.

The local visitors to the monasteries will later collect the water poured over the monks and bring it to their homes. They believed that the water is blessed so they would pour or rub the water over their family members and friends.

In the past, the date of the Songkran was calculated through a system mentioned in the Suriyayart and the celebration was referred to as Maha Songkran Day. The computation of the exact date which is based on the solar calendar, involved royal or local astrologers, with predictions on several aspects, including political affairs, rainfall, agriculture and economy. The chief astrologer or the king will later make the official announcement (Prakat Songkran) of the date to welcome the new year. Thus, Songkran used to be a movable feast.

In 1940 the Thai government fixed the date to celebrate Songkran on April 13 to 15 each year to make it easier to remember. They disregarded its historical traditions and the changes in their own historical calendars.

Still, it is a blessing for many, locals and tourists alike, since April is traditionally the hottest month in Thailand. During Songkran, the temperature could be around 40° C or 104° F.

The Songkran Water Festival is celebrated all over Thailand. Several choice locations in the country hold the festival longer and in a larger scale. If you want to enjoy the local culture and tradition for longer during the Songkran Water Festival, visit Chiang Mai City. The celebration in the city is usually the longest and the largest, often lasting for more than six days.

In Bangkok, the best place to observe the water gun fights or join in the fun is at Silom Street (Patpong). The Khao San Road is also another hub of Songkran-related activities.

The Water Festival in 2011 earned the title, “The Largest Water Gun Fight in the World” according to the Guinness Book of World Records.

Various traditions are observed during the Songkran Festival. Many of these are followed by locals but some are shared to the rest of the world.

Tourists, especially the younger ones have a grand time participating in the water gun fight. The streets are closed to traffic and people young and old arm themselves with colorful water guns, pails, scoops, hoses and other items that can hold clean water. They are at liberty to douse people on the street for fun. Everyone is prepared to get wet during the day. The throwing of water symbolizes fortune and good health for the coming year.

Aside from water, people participating in the water festival are also painted, splashed or rubbed with white chalk. This commemorates the tradition of the monks to make chalk marks in order to preserve the blessings that were made.

The tradition of bringing food as gifts to the monks in the monasteries is still practiced today. While the Thais visit the monasteries to pray, they also bring food to the Buddhist monks. Before they leave the monastery, they pour scented water on Buddha symbols and statues. Later, the Buddha statues will be carried by monks in a street procession. People on the street throw water as the procession passes. 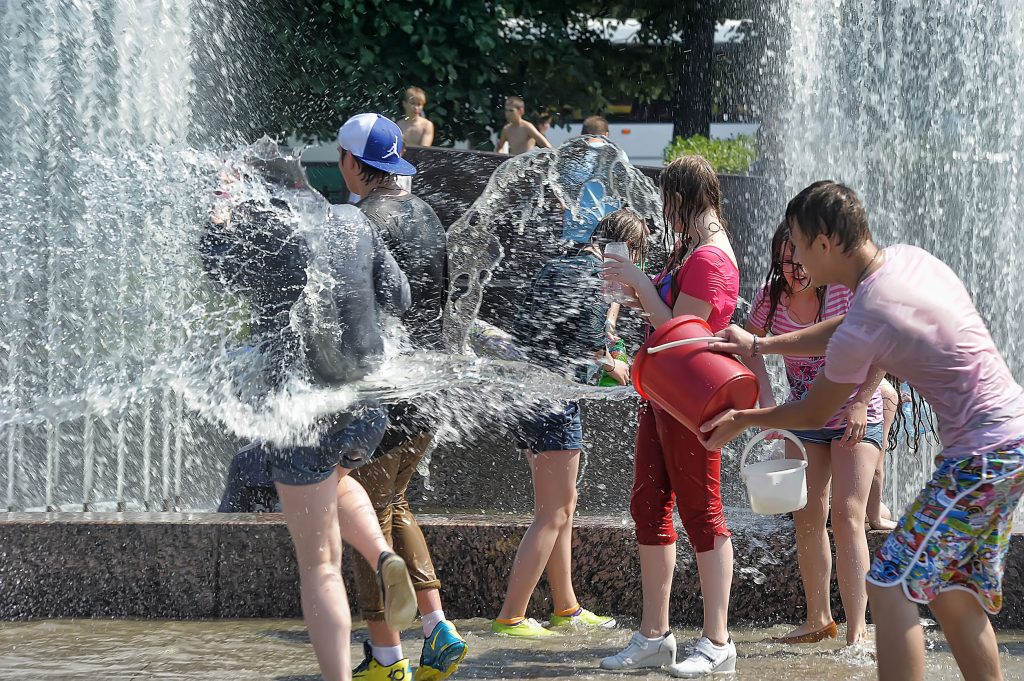 People pour water on each other

In many countries around the world, especially in Asia, people prepare to welcome the new year in different ways but many also observe the tradition of cleaning their homes, wearing new clothes, preparing a feast, exchanging gifts and cleansing their souls.

The Thais start the day with merit-making, such as visiting the temple and giving food to the monks. Thais also pour scented water on young and elderly people as well as over Buddha statues as a means of washing away the sins and bad luck accumulated during the past year. It is a form of purification, which is a means to earn merit points. It is also important for the Thais to pay reverence to their ancestors on this day.

Although the Songkran Water Festival is observed nationwide, the preparations on how to welcome it vary by region.

In the Central Region, the Thais clean their houses thoroughly before the day of the Songkran. They will later dress up in traditional Thai clothing or in other colorful outfit. They will visit the temple to give gifts of food to the monks and honor their ancestors by offering a requiem. To make merit offerings, they may release fish, birds and other animals. They may also give sand to the local temple for repair or construction work.

People in the Southern Region believe in not spending money, working as little as possible, not telling lies, and not hurting other animals or persons.

In the Northern Region, people welcome April 13 with firecrackers or gunfire. They do this to fight off bad luck. On April 14, they prepare things to offer the monks, such as useful stuff and food. They visit the temple with their gifts, bathe the statues of Buddha and pour water on the hands of the elders. They will request the elders to bless them.

The Thais in the Eastern Region follow the preparatory activities similar to the other regions. But for them, making merit is through visiting the temple throughout the Songkran period and creating a sand pagoda. Others still find time to prepare food to bring to their elderly relatives. 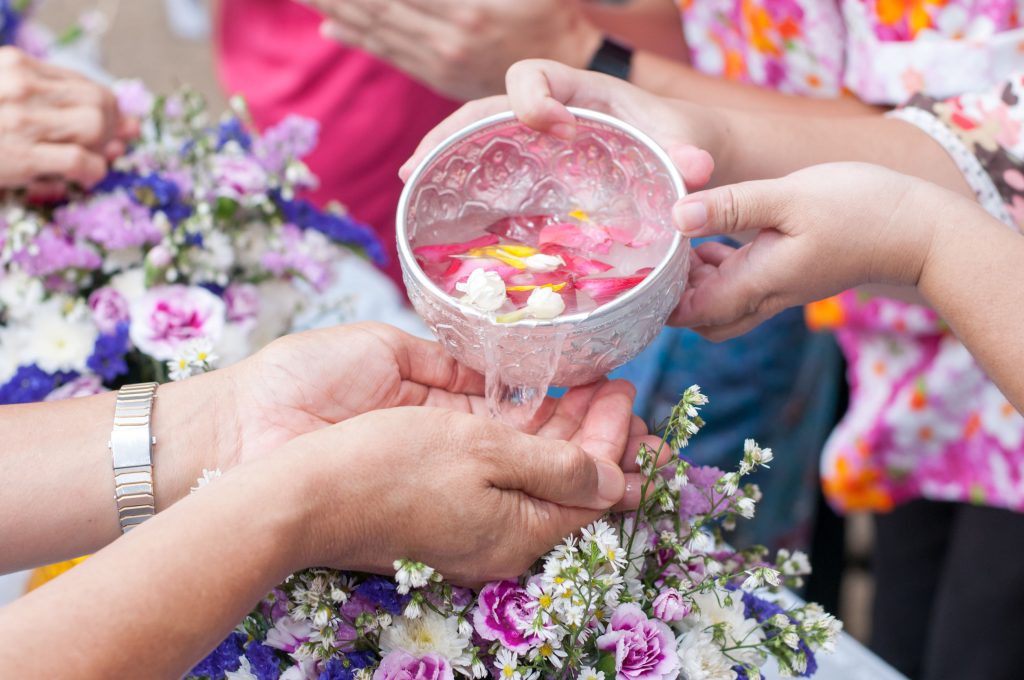 Do’s and don’ts during Songkran

Although the water festival during Songkran is all about having fun, you should observe some rules.

Thai is a tonal language like Vietnamese and Chinese and the pronunciation changes the meaning of a word. Like other tonal languages, Thai has five tones: low, mid, high, rising and falling. It can be quite difficult to master, so Thais do not expect foreigners to speak their language.

But for a non-speaker, a helpful Thai will look at the context of what you are saying instead of the tone. It would be helpful if you were able to pronounce the words clearly.

In Thai the most common greeting is Sa-wàt dee, which is popularly used anytime of the day even if they have distinct phrases for good morning, good afternoon or good evening.

Do remember that in Thailand, English speaking proficiency outside of the tourists areas is very low.

You do not have to learn Thai to be able to understand the language. Let the native Thai speakers of Day Translations, Inc. do an accurate translation of any type of Thai document into English or any other language. Our human translators are available any time, as we are open 24/7. They are located in worldwide, ready to serve you at a moment’s notice. Request a quick translation quote by giving us a call at 1-800-969-6853 or contact us. You can also download Terpy from Google Play or iTunes and install it on your tablet or mobile phone to connect to us faster.

To our Thai brothers and sisters, Sawasdee Pee Mai!