For three days each year, during the first full moon after the lunar New Year in the Korean calendar, a Fire Festival is held in Jeju Island (Jejudo). The Fire Festival is called Jeongwol Daeboruem, a very important national holiday in Korea. It is a ceremony to pray for good health and bountiful harvest for the year. This much-anticipated event is attended not only by the inhabitants of Jeju but also by people across Korea and international tourists as well, as the event is filled with fun and hands-on traditional games and cultural activities held amid the stunning natural beauty of Jeju Island. For 2013, Jeongwol Daeboreum will be celebrated from March 8 to 10.

A bit of the past

First and foremost, the Fire Festival is a cleansing ritual and the prayer ceremony for luck and good harvest. The word daeboreum translates to “great full moon.” During the celebration of the fire festival in Jeju, people from all over flock to the island, braving the cold to climb Mount Halla, a dormant volcano that sits right at the center of Jeju, just to catch the magnificence of the first full moon of the new lunar year. The practice is called “dalmaji.” Some would go as far as the East Coast of South Korea to catch a glimpse of the sun’s first rays at this particular time. Both of these traditions are believed to bring good luck to those who try.

The three-day celebration of the Fire Festival includes many activities that people can participate in. The first day starts with a prayer for good harvest, followed by daytime parades and fun games. There is usually a competition in the creation of the moon house, then the lighting of the sacred fire, torchlight prayer in the evening and burning of the moon houses afterwards.

The second day showcases the Great Unity of Jeju Citizens. Activities include a competition in making straw ropes, competition in Jeju Dialect and competition among “yut” players, called neokdung-begi, which is a traditional board game.

The third day is when most of the fantastic events happen. This is also a prayer day. Competitions include deumdol-deulgi, an unusual race where participants carry stones that weigh 130 kilos in their hands. The one that goes the longest distance without dropping the stone wins. A ceremonial torch is lit, used to light the other torches that will be used by participants to set fire to the big moon house and in burning the oreum followed by a fireworks show.

It is a great learning experience to be able to witness the observance of a country’s traditional culture and customs. South Korea is no different in that regard, as it is one country that had only recently opened its doors to the international community and there are so many things to learn about this Asian dragon.

For the Jeongwol Daeboreum festival, let us take a look at some the terms and the traditions involved in this fascinating celebration in Jeju.

Early on the first day, people wish each other food health and fortune. Then they crack a boreum in their mouth. “Boreum” is any nut with a shell, such as chestnut, pine nut, peanut, gingko nut or walnut, meant to avoid allergies (infections and boils) throughout the year and strengthen teeth. Afterwards they drink “cheongju,” or clear rice wine that has been strained.

People also share boiled “ogokbap.” In Korean, “ogok” translates to five grains and “bap” is the Korean word for rice. It combines sticky rice, millet, rice, black soybeans, red azuki beans or “pat,” sorghum and barnyard millet. It is associated with bountiful harvest. It is accompanied by “namul” or seasoned vegetables prepared in many ways – raw, boiled, sautéed, dried, fermented, steamed or fried and seasoned with sesame oil, vinegar, “gochujang” or red pepper paste and salt.

The moon houses are called “daljip.” “Dal” means moon and “jip” means house. These are hay stacks made of twigs and straw. These are burned to shoo away misfortune and usher in good luck. The burning is called “Daljip Taeugi,” which literally translates to “burning the moon house.” The door of the moon house should face the east. Jeju folks believe that if the moon house burns perfectly, they are assured of a good harvest all year round, but it the moon house falls apart or got blown away, they expect the harvest for the year to be not as fruitful.

“Oreum” in the Jeju dialect means mountain. And on the final day of the celebration, children and visitors light their torches and set fire to the “oreum,” which are fields with dry grass. The tradition of burning is controlled and meant to burn the pests, insect eggs and weeds, with the ashes fertilizing the fields for the next planting season. Younger children hold a game to set fires to the fields, called “jwibulnori,” which translates to “playing with fire.” They hold perforated cans with strings attached. The cans are filled with burning charcoal, which, while the kids twirl the cans round and round fall and ignite the dried grass. It is a spectacular sight as the orange circles of light glow very bright in the early evening darkness.

On the final night, after the burning of the big moon house and setting fire to the 82-acre Sabyeol Oreum (Hyoseongak), the annual host to the festival, a massive and impressive 30-minute fireworks display accompany the burning of the oreum, creating a great and blazing cascades and fountains of light.

Related post: The Distinct and Separate Language of Jeju Island 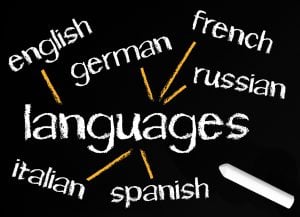 Uncategorized
Languages of the Future: What Will the W
by  Day Translations
0
1
9k