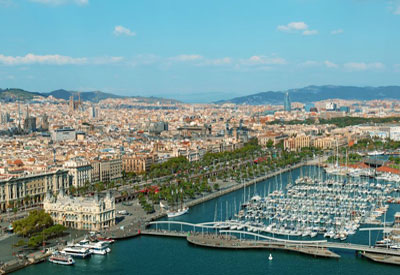 Interesting trivia: Spain is a country of mountains and it ranks second in terms of its elevation, after Switzerland.

Nestled between the Bay of Biscay, the Mediterranean Sea and the North Atlantic Ocean, Spain is located on the Iberian Peninsula in the southwest of Europe bordering Portugal, Gibraltar, Andorra, and France. It has a strategic location as a peninsula washed by three different seas. Spain is a leader in railway, wind power, solar energy and it is also a global player in the international financial market.

Spain’s powerful world empire of the 16th and 17th centuries ultimately yielded command of the seas to England. Subsequent failure to embrace the mercantile and industrial revolutions caused the country to fall behind Britain, France, and Germany in economic and political power. Spain remained neutral in World Wars I and II but suffered through a devastating civil war (1936-39). A peaceful transition to democracy following the death of dictator Francisco FRANCO in 1975, and rapid economic modernization (Spain joined the EU in 1986) have given Spain one of the most dynamic economies in Europe and made it a global champion of freedom. Continuing challenges include Basque Fatherland and Liberty (ETA) terrorism, illegal immigration, and slowing economic growth.

Environment – current issues: pollution of the Mediterranean Sea from raw sewage and effluents from the offshore production of oil and gas; water quality and quantity nationwide; air pollution; deforestation; desertification.