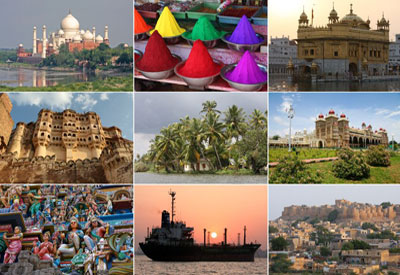 Fact: India is the world’s sixth de facto recognized nuclear weapons state and has the third-largest standing armed force in the world, while its military expenditure ranks tenth in the world.

The Republic of India, commonly known as India, is located in South Asia. It is the seventh-largest country by geographical area, the second-most populous country with over 1.2 billion people, and the most populous democracy in the world. Mainland India is bounded by the Indian Ocean on the south, the Arabian Sea on the west, and the Bay of Bengal on the east; and it is bordered by Pakistan to the west; Bhutan, the People’s Republic of China and Nepal to the north; and Bangladesh and Burma to the east. In the Indian Ocean, mainland India and the Lakshadweep Islands are in the vicinity of Sri Lanka and the Maldives, while India’s Andaman and Nicobar Islands share maritime border with Thailand and the Indonesian island of Sumatra in the Andaman Sea. India has a coastline of 7,517 kilometers (4,700 mi).

Home to the ancient Indus Valley Civilization and a region of historic trade routes and vast empires, the Indian subcontinent was identified with its commercial and cultural wealth for much of its long history. Four of the world’s major religions – Hinduism, Buddhism, Jainismand Sikhism – originated here, while Zoroastrianism, Judaism, Christianity and Islam arrived in the first millennium CE and shaped the region’s diverse culture. Gradually annexed by the British East India Company from the early 18th century and colonized by the United Kingdom from the mid-19th century, India became an independent nation in 1947 after a struggle for independence which was marked by a non-violent resistance led by Mahatma Gandhi.

India is a federal constitutional republic with a parliamentary democracy consisting of 28 states and seven union territories. A pluralistic, multilingual and multiethnic society where more than 400 languages are spoken, India is also home to a diversity of wildlife in a variety of protected habitats. The Indian economy is the world’s eleventh largest economy by nominal GDP and the fourth largest by purchasing power parity. Since the introduction of market-based economic reforms in 1991, India has become one of the fastest growing major economies in the world. India is classified as a newly industrialized country and is one of the four BRIC nations. India is a regional power in South Asia.

The Indus Valley civilization, one of the world’s oldest, flourished during the 3rd and 2nd millennia B.C. and extended into northwestern India. Aryan tribes from the northwest infiltrated onto the Indian subcontinent about 1500 B.C.; their merger with the earlier Dravidian inhabitants created the classical Indian culture. The Maurya Empire of the 4th and 3rd centuries B.C. – which reached its zenith under ASHOKA – united much of South Asia. The Golden Age ushered in by the Gupta dynasty (4th to 6th centuries A.D.) saw a flowering of Indian science, art, and culture. Islam spread across the subcontinent over a period of 700 years. In the 10th and 11th centuries, Turks and Afghans invaded India and established the Delhi Sultanate. In the early 16th century, the Emperor BABUR established the Mughal Dynasty which ruled India for more than three centuries. European explorers began establishing footholds in India during the 16th century. By the 19th century, Great Britain had become the dominant political power on the subcontinent. The British Indian Army played a vital role in both World Wars. Nonviolent resistance to British rule, led by Mohandas GANDHI and Jawaharlal NEHRU, eventually brought about independence in 1947. Communal violence led to the subcontinent’s bloody partition, which resulted in the creation of two separate states, India and Pakistan. The two countries have fought three wars since independence, the last of which in 1971 resulted in East Pakistan becoming the separate nation of Bangladesh. India’s nuclear weapons tests in 1998 caused Pakistan to conduct its own tests that same year. In November 2008, terrorists allegedly originating from Pakistan conducted a series of coordinated attacks in Mumbai, India’s financial capital. Despite pressing problems such as significant overpopulation, environmental degradation, extensive poverty, and widespread corruption, rapid economic development is fueling India’s rise on the world stage. In January 2011, India assumed a nonpermanent seat in the UN Security Council for the 2011-12 term.

Location: Southern Asia, bordering the Arabian Sea and the Bay of Bengal, between Burma and Pakistan Geographic coordinates: 20 00 N, 77 00 E

Languages: Hindi 41%, Bengali 8.1%, Telugu 7.2%, Marathi 7%, Tamil 5.9%, Urdu 5%, Gujarati 4.5%, Kannada 3.7%, Malayalam 3.2%, Oriya 3.2%, Punjabi 2.8%, Assamese 1.3%, Maithili 1.2%, other 5.9%
note: English enjoys the status of subsidiary official language but is the most important language for national, political, and commercial communication; Hindi is the most widely spoken language and primary tongue of 41% of the people; there are 14 other official languages: Bengali, Telugu, Marathi, Tamil, Urdu, Gujarati, Malayalam, Kannada, Oriya, Punjabi, Assamese, Kashmiri, Sindhi, and Sanskrit; Hindustani is a popular variant of Hindi/Urdu spoken widely throughout northern India but is not an official language (2001 census)